2014 and my third trip to the home of snooker & it didn't disappoint.

After the long train journey from Edinburgh and a quick hotel check in it was time for Sheffield’s best takeaway. An excellent large Brisket Burrito from “Street Food Chef” hit the spot & it’s the perfect pre-snooker session lunch. 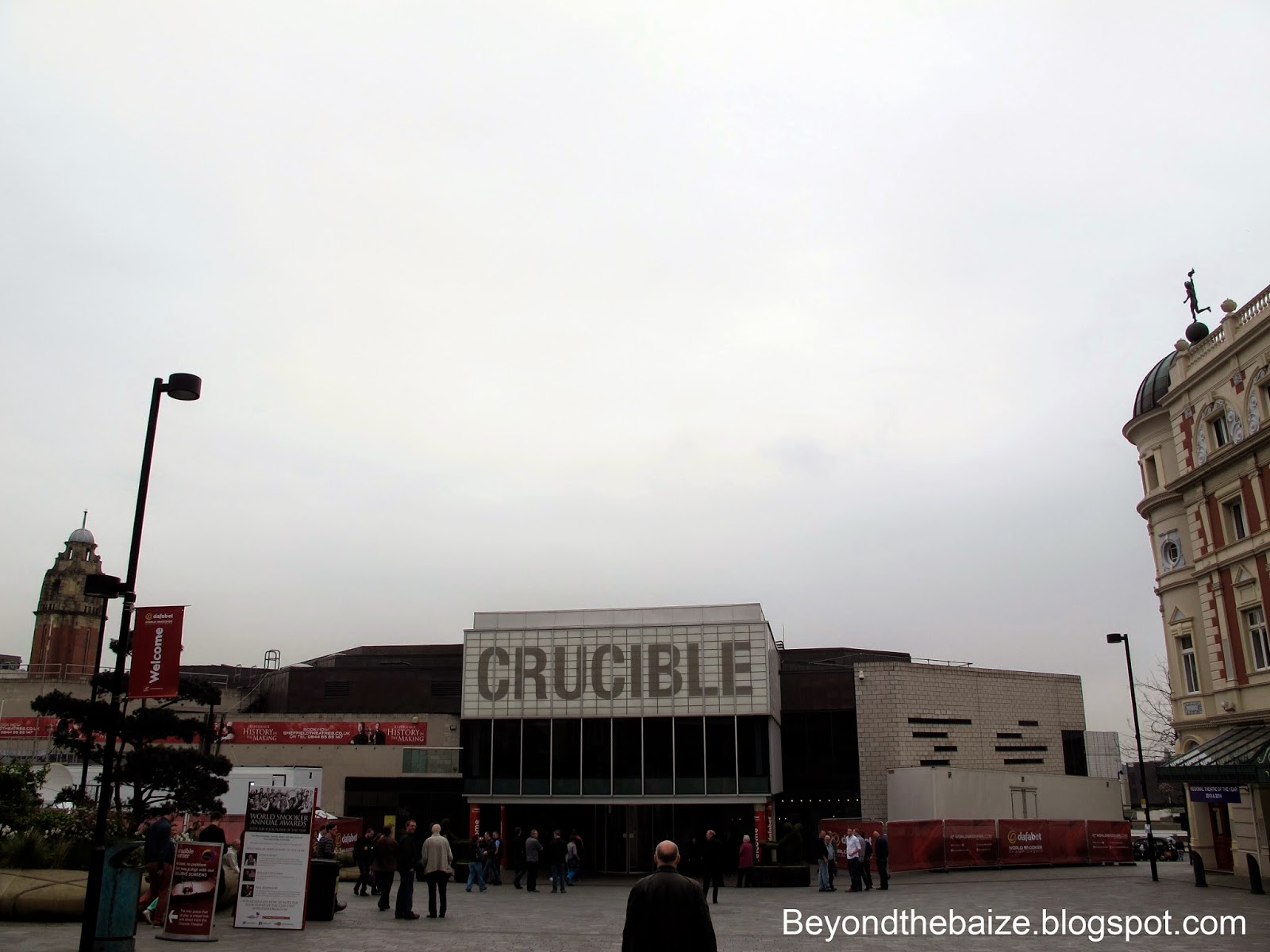 We were in the 2nd row this year and watched as Shaun Murphy constructed a 2-0 lead only to fall apart like an Ikea sofa against Ronnie O’Sullivan. Knowing he should have been 4-0 up at the mid session interval (it was 2-2) he got more and more desperate and handed O’Sullivan the remaining four frames to trail 6-2. It was a strange session, entertaining but not the highest quality. Murphy was excellent to see up close, his technique was by far one of the best I've seen up close & obviously the Rocket is in the same category.

We saw the final two frames of Neil Robertson v Judd Trump on the other side and it was clear Robertson was struggling at this point, Trump finished with a good century to a surprising 6-2 lead.
Strolling back through Tudor Square there was a chance meeting with Mark Selby outside the winter gardens. Wearing his full snooker gear he was far from discreet, even the drunk with his bag of lager took notice. 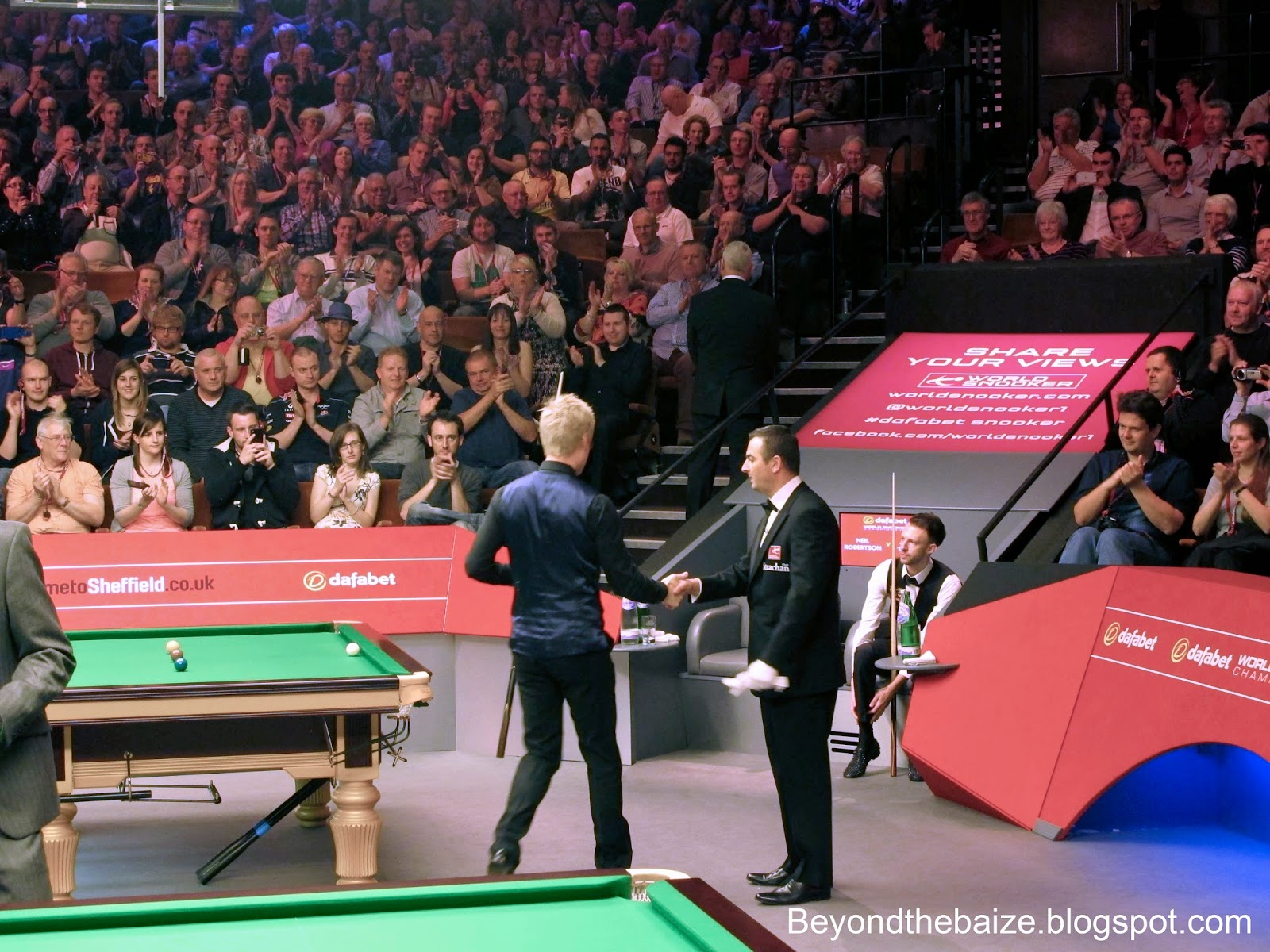 I took the opportunity to ask the rather stressed looking Mark for an autograph, which he kindly obliged, while my dad failed to take a picture of me and Mark, ending up with a fuzzy picture of a bench – one to treasure. You can see the autograph below, it looks like “Marky” to me but I’m not complaining. As I made my way in the opposite direction Mark was mobbed like a member of One Direction outside the Crucible, unlike Harry Styles though he was mobbed by middle aged men & the recently retired community. 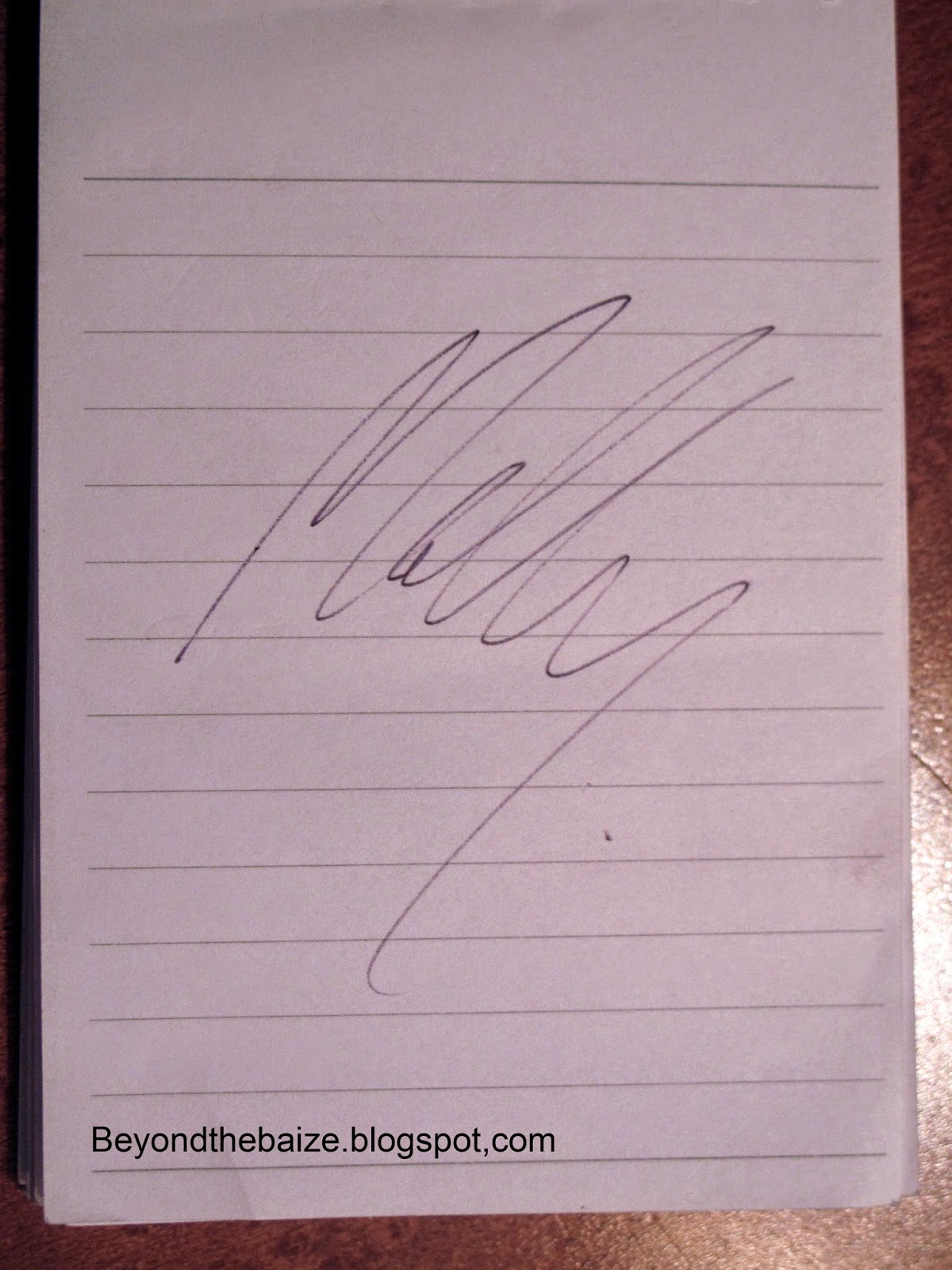 In the evening after a disappointing Barbecue meal at the Smoke Point we settled outside for a few beers. A few tables along from us was a couple of Cockneys who had obviously started a few hours earlier, at one point the conversation flowed loudly along these lines

We moved inside as it got dark but those hardy cockneys stayed outside for a good few hours yet, whether they were able to construct any coherent sentences we will never know. Inside, to my delight I found out the bar sold Viru, the best of all Estonian beers I might add. This full flavoured and light beer was the perfect tonic after a long day of Snooker and travel.

We talked about how good the Crucible is and other such Sheffield/Snooker based topics. While at the next table Steve Davis sat having his dinner and conducting a rather long winded interview. As the Viru’s flowed the table on the other side of us was filled, it was only snooker legend Matthew Selt, oh and Stephen Hendry was there as well. I then saw the bar staff wheeling away an empty box of Viru, had I really drunk that many?

Surely they had another box?

Davis joined the Hendry, Selt party and we had a table of 13 World Titles, and Matt Selt.
I couldn't bring myself to interrupt Davis, Hendry & Selt. My old man wasn't so bothered and came back with Hendry & Davis’s autograph. An avalanche of fans then descended on them from the tables around us, while Matt Selt had to sit sipping his cocktail sadly not being recognised. The bad news however was that the bar was out of Viru & the recommended replacement was a poor imitation on Talin's tastiest.


A much more relaxed Mark Selby walked in after winning 8 of his 9 frames in the evening session to lead Alan McManus 12-4 overnight. A few celebratory drinks were had as a sure-fire place in the semi final was going to be his. At least he hadn't won that evening, as we had tickets to his side of the table in the morning. 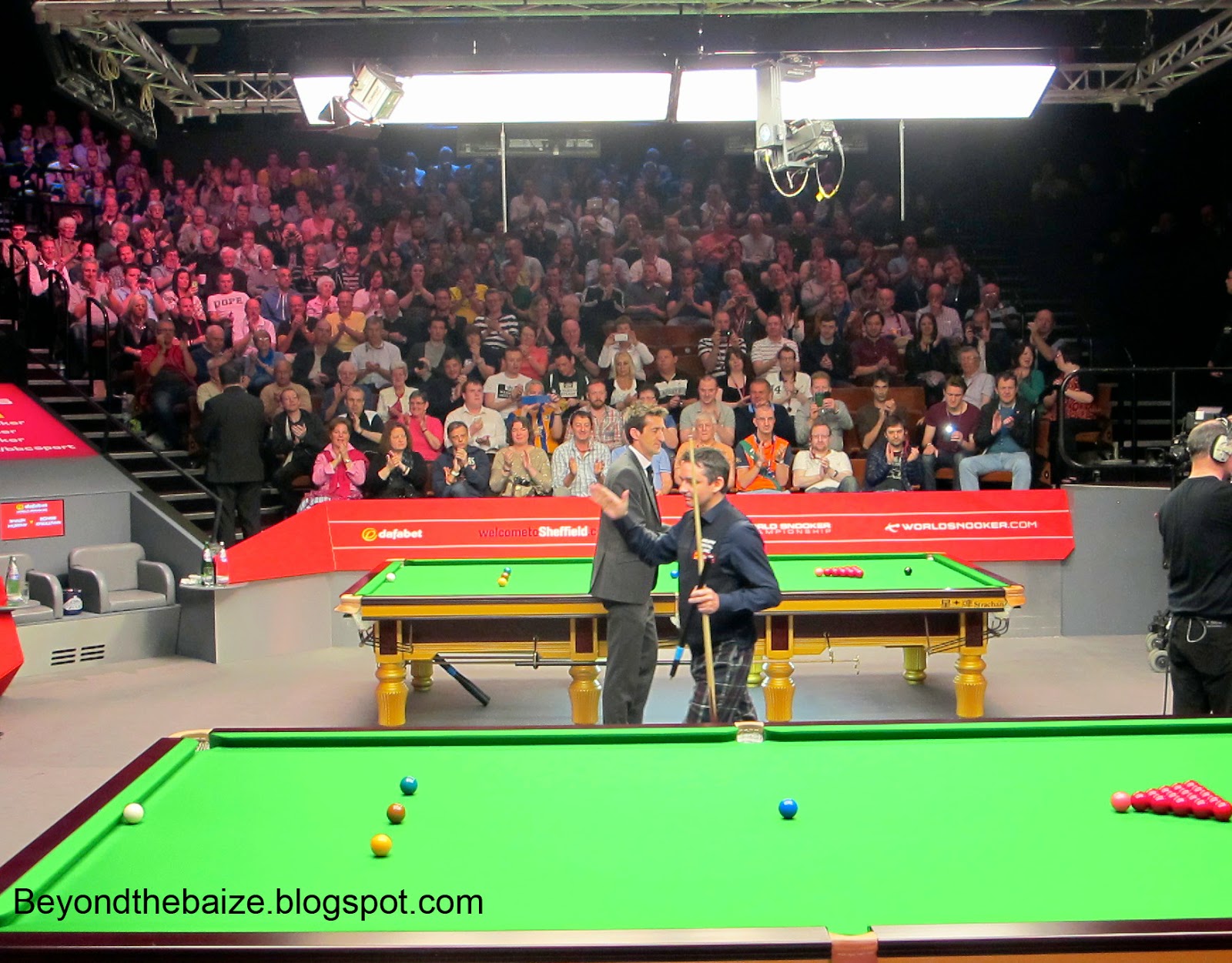 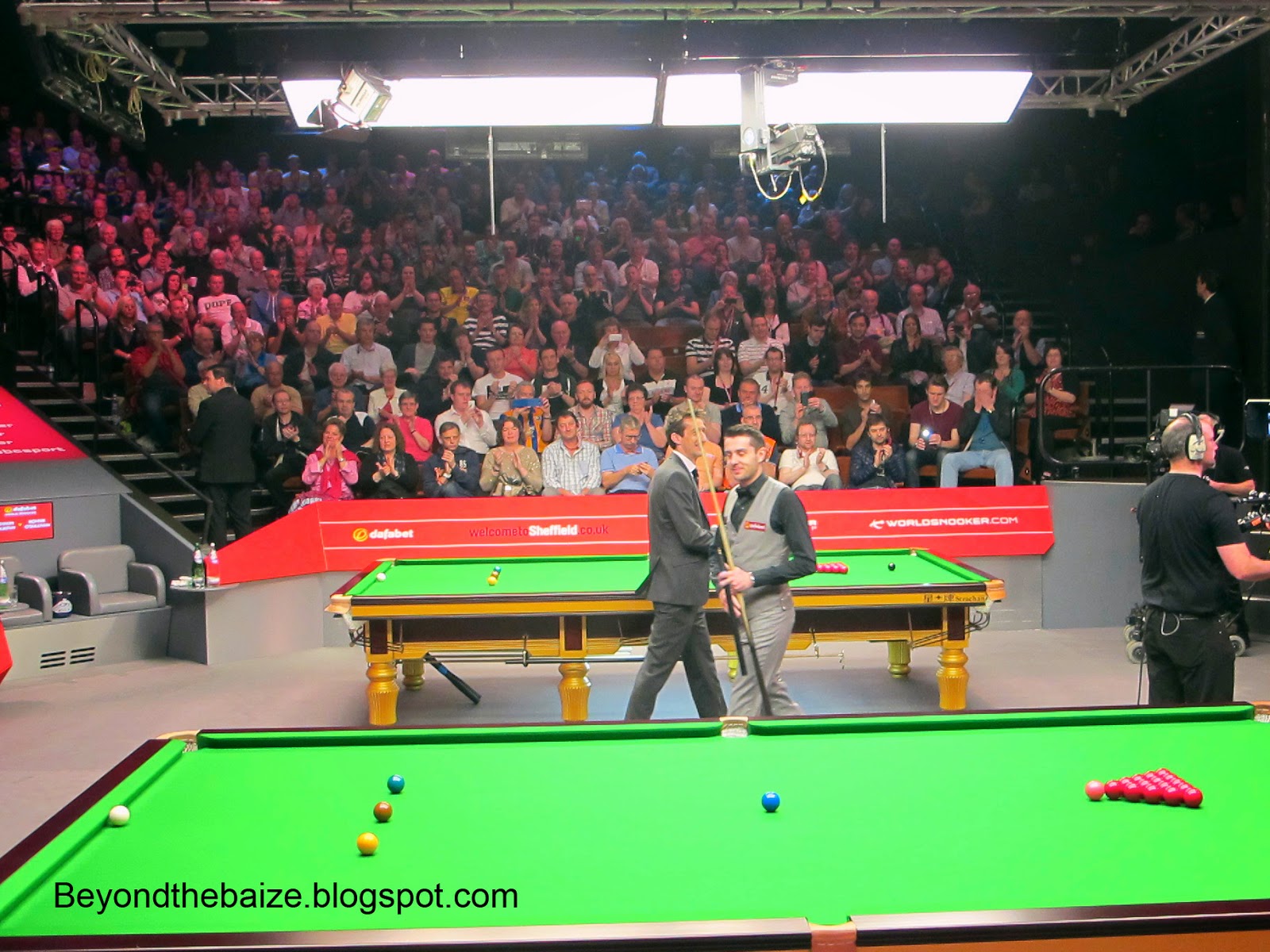 In the morning we saw the final two frames in the McManus v Selby match. Alan constructed a lovely break to win the first but Selby clinched an easy victory in the 2nd. For the remainder of the morning we watched as Ronnie crushed Shaun Murphy. Obviously still mentally scarred from the start he threw away in this match. 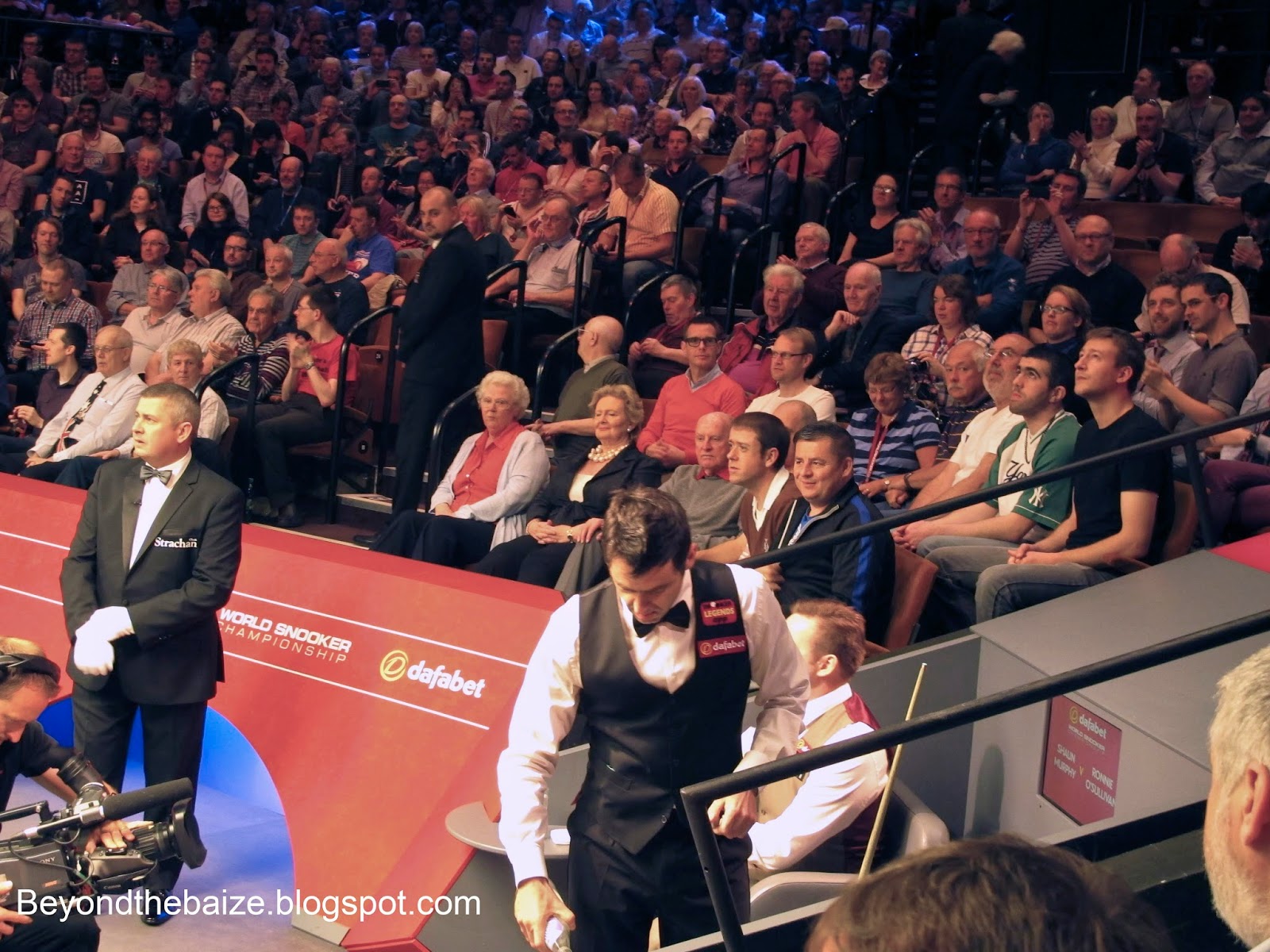 A burrito for the train home and our quick trip was complete. Till the 2015 championship!