I had been a snooker fan for as long as I could remember, well over 15 years but it took me until last year to finally visit the Crucible. Long had I waited, too long some might say and they would be right, but why?

For millions it’s an annual tradition to watch the World Championships on the BBC and since 1977 it has been at the Crucible Theatre in Sheffield. Like Wimbledon and the Masters at Augusta it’s special because it’s the same unforgettable venue. Year after year new memories are created in the same small space. Fans remember Cliff pausing near the end of his memorable 1983 147 break to wipe his brow. On the same side of the arena O’Sullivan threw his chalk into the audience after his 5 minute 20 second maximum in 1997. In more recent years on the other side we've seen Mark Williams in 2005 and Ali Carter in 2008 make maximum breaks.


After an amazing trip last year I had to come back and this year I did. I had tickets for both tables over two days of the quarter finals. I had booked the day they went on sale in July 2012, which was a ridiculous amount of time before the event. However this had allowed me to get two seats in row five on both sides, bang in line with the middle pockets.

Last year we drove from Edinburgh and this year we tried the train, coming from Edinburgh it’s an enjoyable train journey lasting just under four hours. The advantage we found was we were less fatigued and the train station is ideally located within a five minute walk of Tudor Square & the Crucible.


Tudor Square has been renovated a lot in recent years and looks the part these days with the Crucible at one end and the Winter Gardens at the other. The city centre is very nice and is home to several nice reasonably priced hotels, restaurants, bars and shops. The Winter Gardens is home to the Cue Zone. Where the BBC studio and pundits live during the day, you can look around and take pictures. It’s a nice building and good shelter if the weather turns, with a cafe at the far end. 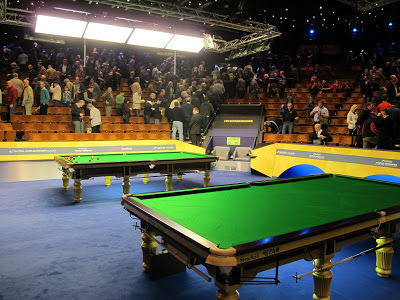 Entering the Crucible for the first time is an exciting experience; the walls are wrapped in images of past champions and historic moments. The foyer is minimal, a few stalls selling programmes and a small bar area but there is a buzz before a session.

The first thing that hits you as you enter the arena and look down is how small it appears. Now I know everyone says this but it really is noticeable and you can’t imagine there are 900+ seats. The steep tiered seating means every seat has an excellent view.

The seats are comfortable and with ample leg room, although if it’s a long session you may want to stand up in between frames. I bought myself a headset to listen to commentary during the session, which is a little bit of struggle to get going at first and for the first few minutes you are scared you have it too loud, but it does improve the experience. A programme and a headset set me back £11 and I think a bottle of water was £1.75 so it wasn't too expensive.

Quick tip: Keep your headset if you plan to return as it’ll still work next year.

After Rob Walker warms up the crowd and the players come out the divide goes down an eerie silence descends on the arena. You then really realise how close to the action you are, people in the front row can literally reach out and touch the players. It’s this intimacy that really allows everyone to enjoy the enormous skill this great game of snooker requires and the little touches of genius the top players demonstrate in each frame.

Player Entrances from my seat.

I would highly recommend making the trip to Sheffield for anyone who enjoys watching snooker, it really is a very enjoyable experience and the city has a great atmosphere during the Championships.

Highlights of the Crucible trip: Willie Thorne eating breakfast alone in the hotel dining room while Parrott - who wore out the floor walking between his seat and the pastry table - and Hazel Irvine sat a few feet away. Who would have guessed that Thorne liked a full English breakfast? Oh and Ronnie wasn't bad either.

A Few pictures from my trip. 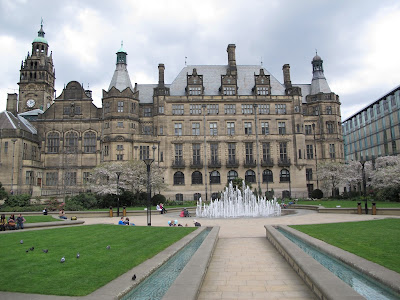